The Aftermath of a Snowstorm on a Farm

The day after Snowmageddon, and we survived even the aftermath of a snowstorm on the farm. I measured 26 inches of snow last night before I went to bed.  That could have included some in drifts, but not much. Besides the snow packs, right?

The goats are all safe and warm although they will not go out of the barn. The chicken coop and run is still intact 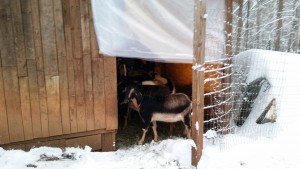 although the girls will not venture out more than about 3 feet out of the coop. Ethel and Lucy are slowly but surely making a path around the perimeter of the goat enclosure so they can do their job of supervising their domain, and we did not lose power.  We wait for the man to plow the 1/4 mile drive, and we think back on the last 2 days with joy in our hearts and the memory of a couple of adventures. 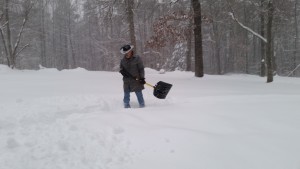 Yesterday began with a long shoveling trip to the barn.  By morning, we had around 14 inches of snow on the ground and thought it would save us some energy in the long run to shovel the way.  So 30 minutes later, we arrived at the barn, worn out but glad to see that everyone was fine.  Next, Derek and I (Kathy) decided to make our way to Grandma’s house to remove the snow from a part of her roof that is flat so that the additional accumulation of the day would not cause any type of collapse, so across the field we shoveled.

Derek wanted to grab his snowboard out of his car parked near her house so he could try snow boarding over a pile of snow on our small hill, and we figured it would be easier getting back if we shoveled that way too.  45 minutes later, we arrived at out destination, worn out and a bit shaky from all of the work that we were not used to.

The First Slopes in Crozet 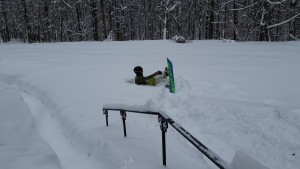 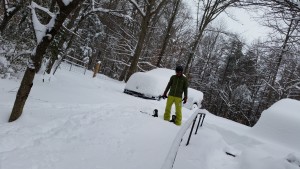 When we got back home, we tried to pack down the snow for Derek to “jump” over.  He gave it a try but after a bit, decided that the snow was too dry and the hill not steep enough to get up the speed he needed.   So FAIL.  Oh well.

Lucy Makes A Break For It

The last and biggest adventure of the day was at 4:00.  We went down to the barn to take care of the animals.  At this point the accumulation for the day was in the area of 25 inches,  and I was exhausted.  To feed Ethel and Lucy, we usually put their food in a small area that is isolated from the goats so the goats don’t eat it, but this area was unreachable without shoveling some very deep snow, so in my wisdom, I decided to feed them inside the barn in the milking stall.  Only they had NEVER, EVER done this before.

I fought with them to get them into the stall, and finally had success, when Lucy totally freaked out, clearly telling me in the only way she could that this was totally unacceptable: she used her nose to pry open the barn door and escape.  Out into the wonderful world of snow she ran, and of course, I was not happy with her, and she knew it.  I called, and called. But she knew with all of her being that I was unhappy and I was not going to be fun to return to, so she would not come.

The good news is that other than a few steps at a time, she would not venture off the paths that we had made around the house.  I had to holler up to the house to get Bob out to help, and then Oma (Kathy’s mom) got involved when Lucy showed up at her door (the basement door to the house).  All ended well when Bob knelt down looking all happy and welcoming, and Lucy ran right up to him wagging her tail.  By the time she got back to the barn, she simply would not eat, and we had to end up shoveling out their feeding area anyway so she could get to her special eating spot.  Not my best idea of all time. . . .

Waiting for the Plow 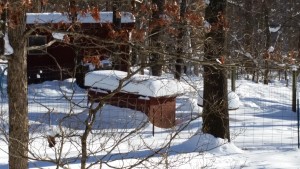 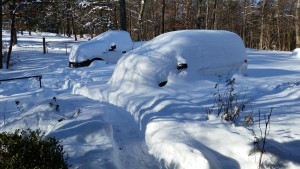 Now, Snowmageddon is over, and we wait for Mr.Black to arrive with his trusty snow plow
to get us out of our little corner of the world yet again.

What was your snow experience like? Did you have any adventures?