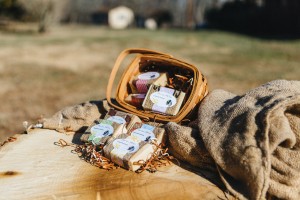 Early Soap – Not much has changed except the label.

Early in our goat milk soap making endeavors, we used a simple mold made out of 2 x 4s.  This mold was 36 inches long and 3 1/2 inches wide.  We lined the entire mold with freezer paper, a time-consuming process, and made enough soap to pour two molds at a time, or about 56 bars in a batch.

Our typical batch was made in a 5-gallon bucket, then lifted and poured on the kitchen counter.  That was a lot of lifting and reaching.  After we poured the soap, we then tapped the sides of the mold to make sure all of the air bubbles were out of the batch, and then let it cure for 24 hours before cutting it into bars.

One fateful day, we decided that it would save us a little energy by pouring the batch on the floor.  We lined the molds and placed them on the kitchen floor.  We proceeded to mix our batch of soap as usual and poured it easy as pie into the molds.  We tapped the sides and got them all ready to cure.  Only then did we think about the fact that we had to get these molds from the floor to the kitchen counter.

You see, we have 3 indoor dogs–a boxer, who at 13 years of age still acts like a puppy, and 2 energetic and curious miniature schnauzers.  We could not leave the soap on the floor for their sniffing pleasure as not only would it ruin the soap to have little nose marks in it, but it could also burn their little noses.   In the first 24 hours after making the soap, the soap is caustic.  The chemical reaction of saponification is taking place, and there is still caustic lye in the liquid soap mixture.  So we HAD to move it up to the kitchen counter to cure.

Thankfully, we had taken appropriate safety precautions.  The dogs were all safely closed in the pantry, and both Bob and I had our long utility gloves on.  No burns, no injuries, just a bit of spilled soap.  And what do they say, Don’t cry over spilled soap?   Oh, perhaps my liquid is wrong. 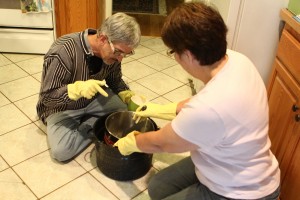 In any case, we both had a good laugh and decided that pouring on the floor was not a great idea after all.  We let the soap mixture firm up a little on the floor and scooped it up with a large spoon, then had a sudsy mopping up of the rest…. No harm, no foul, and a great lesson learned.

Not much has changed here either except the size of our pots.